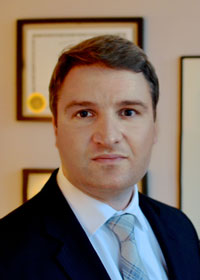 Craig J. Kamback, a partner with the firm earned a Bachelor of Science in Psychobiology from the Binghamton University in 1998. Mr. Kamback received his Juris Doctor Degree from Hofstra University School of Law in 2003. While in law school, Mr. Kamback worked full time for a New York based environmental company and spent the year after September 11, 2001 consulting with real estate and property managers of multiple properties surrounding Ground Zero, in the five boroughs, as well as Nassau and Suffolk Counties.

Prior to joining Silverson, Pareres & Lombardi, Mr. Kamback was an Associate for Brea Yankowitz, P.C., where he was involved in medical malpractice, premises liability, and labor law defense. Mr. Kamback is admitted to practice in the Courts of New York State and the United States District Courts for the Eastern and Southern Districts. He is currently a trial attorney in the firm handling medical malpractice cases.