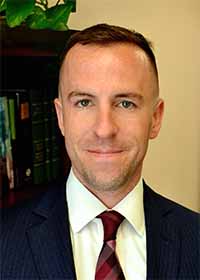 Stephen M. Marcellino, Jr., is an associate attorney with the firm and was admitted to the New York State Bar in 2018. Mr. Marcellino received his B.A. in Political Science from Iona College, where he was an active member of the National Political Science Honors Society (Pi Sigma Alpha). Mr. Marcellino then went on to receive his Masters in International Business (M.B.A.) from the Hagan School of Business at Iona College. During his graduate studies, he did an international internship in Brussels, Belgium for an Alternative Dispute Resolution group, which offered services to various EU institutions, as well as, the international banking and finance communities. While in Europe, Mr. Marcellino published an article titled “Entrusting Antitrust Issues to Arbitration in the European Union". Mr. Marcellino then went on to receive his Juris Doctorate Degree from Pace University School of Law. During law school, Mr. Marcellino served as an extern for the Honorable William J. Giacomo of the New York State Supreme Court, Westchester County where he gained valuable litigation and legal research experience. In addition, Mr. Marcellino was selected for a Corporate Externship Program, in which he worked directly with the CCO of a New York based Hedge Fund and gained valuable insight and experience into the regulatory and financial industries. Since graduating law school, Mr. Marcellino has built upon this strong legal and financial foundation and continues to excel in a wide range of practices including insurance coverage, medical malpractice, personal injury and business law.